American tourists are banned from Europe, but not these countries

THE BAD NEWS: if you’re an American traveler, you won’t be going on that biking trip through Tuscany or munching croissants in Paris. At le... 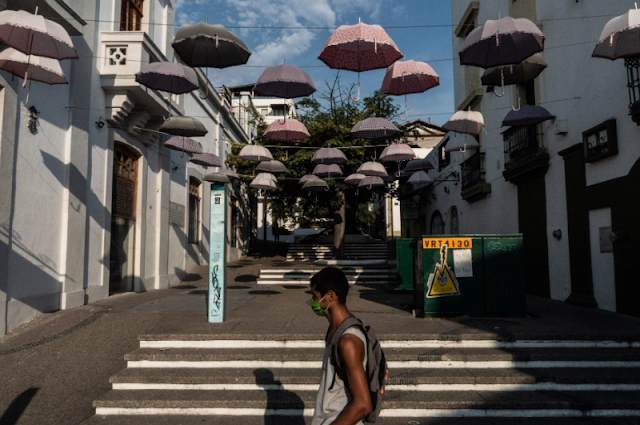 THE BAD NEWS: if you’re an American traveler, you won’t be going on that biking trip through Tuscany or munching croissants in Paris. At least not this summer. When the European Union opened to visitors on July 1 after months of coronavirus lockdowns, the U.S. didn’t make the list of 14 countries allowed tourist entry. The E.U.’s calculus was complicated; in short, it aims to reduce the risk of COVID spikes.

The good news, at least for Americans with wanderlust: U.S. passport holders can still visit multiple countries in the Caribbean, many states in Mexico (though its land border remains closed), and several farther-flung locales. Canada remains on the no-entry list.

But don’t pack your bags without considering ethical and safety questions about whether you should go at all. “Travelers assume the responsibility to exercise precautions,” says Elhanan Bar-On, a doctor and the director of the Israel Center for Disaster Medicine and Humanitarian Response. “Their potential for spreading the virus from highly endemic countries to those less affected is still great.”

Where can Americans go?
Destinations that reopen to outsiders are doing so with caution. Jesus Ordoñez, general director of Visit Baja Sur, says reopening was “not a decision we’ve taken lightly. We wanted to be as safe as possible for all, including our community.”

Like many other tourist spots in Mexico, Baja Sur is implementing regional, national, and international safety and hygiene protocols, including those needed to earn the World Travel and Tourism Council’s new Global Safety Safe Travels Stamp. The list of WHO- and CDC-aligned practices, meant to slow the transmission of COVID-19, includes ramped-up disinfecting, banning self-serve buffets, and implementing contactless hotel check in methods. Still, the state of Sonora made headlines recently for severely restricting tourism arrivals from the U.S. due to the high COVID-19 caseload in Arizona across the border.

SCIENCE
Some trees may 'social distance' to avoid disease

SCIENCE
Coronavirus in the U.S.: Where cases are growing and declining
Jamaica, which reopened June 15, now requires travelers to apply in advance for a Jamaican COVID travel authorization, a personalized same-day health risk assessment essentially giving vacationers the green light to hit its beaches. Visitors from high-risk locations and those showing symptoms will be tested on arrival and quarantined if necessary.

How do countries decide?
Many countries, particularly in Central America or Africa, rely on robust tourism economies. Deciding how to balance health and safety with the essential role tourism plays in their bottom lines is critical. But exactly how to do that is the million Euro/dollar/yen question of 2020.

Belize reopens on August 15 and will require certification of a negative PCR COVID test within 72 hours or testing on arrival. “Everyone really wants to see the return of tourism as it not only creates so many good jobs, but it provides a great deal of funding for Belize's progressive conservation efforts,” says Colleen Spring, co-owner of Table Rock Jungle Lodge near San Ignacio, Belize. “Belizeans are very country-proud,” she says. “They love to show it off.” Reopening a country like Belize, which has fewer than 25 COVID cases, is easier.

But India, with the world’s third-highest COVID-19 case count, remains closed. Brijesh Pancholi is the proprietor of Chandan Travels, a travel agency and tour operator in Ahmedabad, India. “My heart goes out for the whole hospitality industry,” he says. “A lot of people are laid off or asked to sit at home without pay.” Although his livelihood is dependent on travel, he’s not in a hurry to see visitors return. “I would definitely prefer to wait and watch rather than rushing,” he says.

That elusive balance is one of the reasons the Caribbean island Grenada slowed its reopening, tentatively planned for June 30. In a June 28 speech, Grenada’s prime minister specifically cited the U.S.’s rising infection rate as a factor in the government’s decision to delay reopening fully and only allow charter, rather than commercial, flights in for now.

Tourism is essential for the economies of many destinations—and the livelihoods of individuals and families—and plays a role in reducing poverty. “I was born in the Caribbean, so I know many small but beautiful places that will revert to a subsistence economy without tourism,” says Farley Cleghorn, the global head of health practice at consultancy firm Palladium. He explains that while such destinations are anxious to reopen, coping with a virus outbreak would be a challenge. “Trying to find the balance of the risks with the lifeline of tourist dollars is a real preoccupation,” he says.
Each country open to tourism has different protocols for deeming incoming travelers safe to enter its borders and interact with its citizens. Visitors to the Maldives, open as of July 15, are required to fill in a health declaration and, until August 1, restricted to stays on liveaboards or otherwise-uninhabited resort islands like Coco Bodu Hithi. Should a traveler have COVID symptoms, they’ll be tested on arrival, but may be allowed to self-isolate at their resort.

Sri Lanka, set to open August 1, may have the most stringent protocols: all foreign visitors must have a negative COVID test 72 hours prior to departure, and then submit to more tests upon arrival and on the fourth and tenth days of their trip. Countries tend to prefer certification via the COVID-19 PCR test (despite the fact that false negatives can range from 2 to 29 percent) though the time it’s deemed valid varies from country to country. Antibody tests are seen as less reliable.

Photograph of locations to visit during the time of covid
On June 28, 2020, masked, socially distancing parishioners attend a Mass at the Basilica de los Angeles in Cartago, Costa Rica.
PHOTOGRAPH BY EZEQUIEL BECERRA, AFP, GETTY IMAGES

Many countries, including Canada and South Africa, aren’t rushing to open borders. When South Africa’s lockdown began, the tourism minister said international travel might not restart until 2021. Lisa Steffen, of South Africa’s Book to Travel, cautions that countries that open up too quickly “could kill their future tourism options, and … also kill the very reasons that make tourists visit in the first place.”

Why can’t U.S. citizens go to Europe?
Americans dropped $144 billion on tourism in 2018, making them the world’s biggest travel spenders after the Chinese. When they decide to go abroad, some 15 million of them choose Europe, mostly in the sunny summer. This means those new restrictions may protect European lives, but they will also severely affect the tourism industry across the continent.

Europe’s door isn’t permanently locked—its members will reevaluate border policies every two weeks. But closed borders, cautious reopenings, and the WHO’s June 30 statement that “the worst is yet to come” are much-needed cautionary reminders for all travelers.

The European Council released its approved list of 14 countries whose citizens could, starting July 1, enter the E.U.’s borders and travel within its 27 member states, as well as to the Schengen-associated nations of Iceland, Lichtenstein, Norway, and Switzerland (a.k.a. “the E.U.+”). The U.S. wasn’t included in either the final 14 or the 54 countries first considered.

Michelle Jackson, a Colorado Destination Content Creator in Denver, wasn’t surprised. “Many Americans were shocked when they woke up to the news that American tourism would be banned in the E.U. I wasn’t,” she says. “What many people forget is that each country is tasked with managing the best interests of its citizens. During a pandemic, those considerations are literally life and death. I don’t even want tourists from Texas or Arizona visiting my state of Colorado. I didn’t hunker down in my 498-square-foot condo to have other people mess up our progress."

Not all American tourism forces are pleased. In a June 26 statement, the U.S. Travel Association’s executive vice president for public affairs and policy, Tori Emerson Barnes, called the E.U.’s news “incredibly disappointing” and “a step in the wrong direction as we seek to rebuild our global economy.” She added that there will be “major negative implications for an economic recovery—particularly if this ban results in cycles of retaliation, as is so often the case.”

Epidemiology—rather than economics or retaliation—seems to be the main factor behind the E.U.’s determination of which countries are (and remain) on its welcomed list. Countries’ epidemiological situations are compared to the E.U.’s. The number of new COVID cases in the last 14 days per 100,000 population needs to be close to or below the E.U.’s June 15 number—16. At the time, the number in the U.S. was 107. Countries also need to have credible data, a stable or decreasing trend of new cases, and a satisfactory COVID response, including “testing, surveillance, contact tracing, containment, treatment, and reporting.”

The faster the U.S. gets its COVID cases under control, the faster Europe should reopen to Americans. For now, the 14 greenlighted countries are Algeria, Australia, Canada, Georgia, Japan, Montenegro, Morocco, New Zealand, Rwanda, Serbia, South Korea, Thailand, Tunisia, and Uruguay. In-transit passengers and long-term E.U. residents are among the handful of exceptions. There’s an exception open to Americans too: Serbia, not yet part of the E.U., reopened for tourism on May 22.

Reciprocity: Open to each other
The New York Times reported that “European Union officials tried to base their decision on scientific criteria, in part to depoliticize the process and shield themselves from diplomatic pressures,” and that many countries, including the U.S., lobbied hard to be granted entry.

Reciprocity (not retaliation) seems to have been considered. The E.U.’s June 30 statement said that if China adjusts its rules to allow E.U. residents access, it will become the 15th member on the E.U.’s list.