These immunocompromised college students felt isolated when the fall semester began. So they did something about it

These immunocompromised college students felt isolated when the fall semester began. So they did something about it On the list of propose...

These immunocompromised college students felt isolated when the fall semester began. So they did something about it 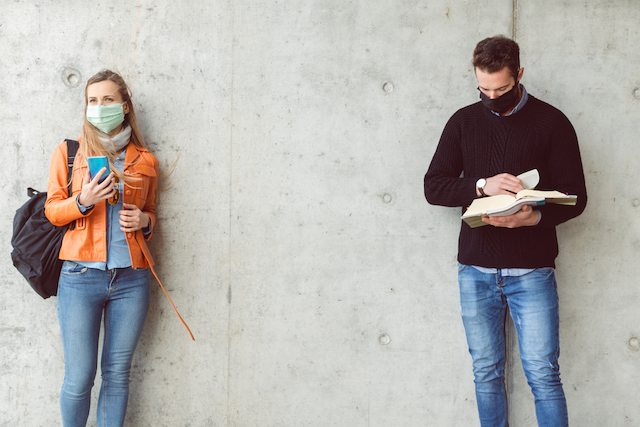 On the list of proposed topics: "Have you had a hard time with friends in the pandemic?", "Are you planning to go back to school in the fall?" and "How have you been coping on a day-to-day basis?"

But Lynch quickly realized that the group of immunocompromised college students didn't need questions to guide them. They just wanted to talk about their shared feeling of isolation during the pandemic.

They bonded over the fact that people assume that all teens are healthy. They questioned whether their schools were taking the right measures to help those who are more at-risk. They vented about their friends not understanding their inability to leave the house without fear of contracting Covid.

It's a virtual support group for immunocompromised students -- but its members don't call it that. They prefer the name "Chronic and Iconic."

It all started with a social media post. Lynch, who has Type 1 diabetes, celiac disease and a form of muscular dystrophy, opened up in a heartfelt letter to her friends and followers.

"While I have been preparing my body to fight the virus by running so my lung capacity can be better, eating healthy so that my body has enough nutrients to fight, and attempting to manage my disease (which is difficult with teenage hormones), it seems that everyone else has stopped caring," Lynch, 19, wrote in the letter, which she shared with CNN. "My reality is different. My reality is isolating."

Her reality means she can't hang out with other college students who she said she sees on her social media feed "flood to the beaches to drink their White Claws." Instead, it means she sits alone in her bed "afraid that no one cares."

Much to Lynch's surprise, the post resonated beyond her own social network. What started in July as a five-person Zoom hangout has turned into a 50-plus person group -- with students from across the US -- who have an ongoing GroupMe text messaging chain and frequent video calls.

As US colleges and universities return -- either in-person, online only or both in what's called the "hybrid model" -- immunocompromised students are struggling to figure out how to navigate school during a pandemic. If their classes aren't offered online, some are forced to rearrange their schedules or risk falling behind. If they don't feel safe going to campus, some have to take a leave of absence. And throughout it all, some say the feeling of isolation has become overwhelming.

"I think one thing that the media and schools don't seem to understand is how these policies are impacting the mental health of their students," Lynch told CNN.

"By saying that in-person learning is essential, that's basically saying the community can function without us, and is better off when we're not there."

In her letter, Lynch emphasized that her new normal means limiting time outside, even though she's sick of watching shows on Netflix. Unlike her peers, who can cautiously partake in activities, she feels she has to keep her life on hold until Covid is no longer a threat.

People with underlying medical conditions are more likely to become seriously ill if they get Covid-19. Some of them are young and most of them may not look sick at all. Millions of them are living with a compromised immune system.

"People with weakened immune systems are at higher risk of getting severely sick from SARS-CoV-2, the virus that causes COVID-19," the US Centers for Disease Control and Prevention (CDC) writes on its website. "They may also remain infectious for a longer period of time than others with COVID-19."

Aside from worrying about getting infected, many of these immunocompromised students said they feel anxious about people -- specifically their peers -- disobeying health and safety guidelines.

To date, there are more than 40,000 cases of Covid-19 among students, faculty and staff at colleges and universities nationwide. The number represents cases that CNN has reported so far -- and is likely higher due to a lag from schools that update their data every few days.

With social life trickling back to life on campuses, coronavirus outbreaks have hit places where students congregate, like fraternities and sororities, where some have continued to gather despite remote learning. While most students will likely recover, health experts have expressed concern that young people would spread the virus to the more vulnerable in their communities.

"With the pandemic, we don't have same sense of immortality as other people," Lynch said. "This is very real for us. If we get a cold, we're in hospital for four days. We have to take it more seriously. If there aren't systems in place we have to make them."

They found comfort in a virtual community

Samantha Price, who has Type 1 diabetes, was among the first to respond to Lynch's letter.

Price and Lynch met doing community theater in Richmond, Virginia, when they were 10 and nine years old, respectively. They bonded after realizing they both have diabetes. Over the years, they lost touch. But Price saw Lynch's post and reached out.

Together, the two created the support group, which now includes people with a range of disabilities.

"We always say, 'Can you explain what that is please?' when people say what their disability is," Lynch said. "We learn what everyone's going through, and how we can better support each other."

Price, a junior at the University of Mary Washington in Fredericksburg, Virginia, said it's been comforting to connect with people who understand how she's been feeling.

"We're not normally surrounded by people who can relate to us," Price told CNN.

"It (the group) helps us have our feelings validated. If I'm super depressed or down in the dumps one day because my friends are going out and posting about it ... complaining isn't going to do anything," the 20-year-old said.

"But if I'm able to go to this group and say, 'this happened' 15 people like it or respond and say, 'I totally understand, that happened to me.'"

"At this time it's very easy to feel ostracized and alone," said Ahern, who said she is immunocompromised because of a medication she takes. "Because everyone's kind of paying attention to older people because they are immunocompromised, and younger people kind of expect all young people to be able to reckless and go out and party and everything."

Ahern's college is mostly remote for the semester, but she lives near other schools and sees students everywhere.

"I can't see my friends because they are all partying, they aren't willing to give up partying just to wear a mask and social distance (and) see me," she said. "There's very little contact outside of my family. It's very lonely not interacting with anyone."

The virtual group has been "amazing," especially as she struggled to connect to her existing social circle during the pandemic, she said.

It's not surprising that the pandemic has affected the mental health of many nationwide, including young people. The National Center for Health Statistics and the US Census Bureau estimate that more than a third of Americans have experienced symptoms of depression and anxiety since spring. A recent CDC survey found that almost 41% of respondents are struggling with mental health issues stemming from the pandemic -- both related to the pandemic itself and the measures used to contain it, including physical distancing and stay-at-home orders.

"A lot of students in the group text us, like 'Today was a terrible day, I'm so frustrated,'" Lynch said. "We're kind of like a help line in a sense. We're all at home so people respond very quickly."

Now, the group has gone beyond just sharing their problems.

"People will talk about their highlight of the week, what quarantine crafts they've started," Price said. "Some people will tell us about their personal lives. We've actually gotten to know these people really well."

Aleah Colón-Alfonso, who has small fiber neuropathy, Lyme disease and accompanying secondary illnesses, said she felt the need to do something after noticing the lack of social distancing and facial coverings in Sarasota, Florida.

Though the junior at the New College of Florida isn't part of the virtual support group, she has found a different way to help people who are in similar situations. 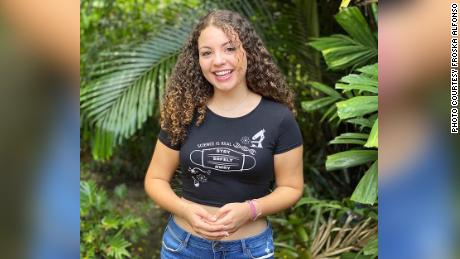 Aleah Colón-Alfonso, founder of Stay Safely Away, models for her newest "Science is Real" collection.

In July, she officially launched a business called Stay Safely Away, which sells wearable merchandise that lets people display their immunocompromised status to urge others around them to "stay safely away."

"Communicating behind masks and from a distance is difficult, so my idea and all my products attempt to serve as an unspoken and polite assertion," she told CNN.

The company now sells more than 150 products, including beach towels, face masks, backpacks, school supplies, swimwear and stickers. All merchandise includes some sort of catchy yet informative message, like: "I'm not rude, I'm just immunocompromised" and "science is real."

"'I'm not rude, I'm just immunocompromised' was a direct quote of what I wanted to say to every person I socially distanced myself from," she said. "The phrase is essentially a shortened version of 'I really don't want to be rude -- but I also really don't want to end up on a ventilator!'"

In recent interviews with CNN, three developmental psychologists said they believe the majority of students are taking the pandemic seriously and acting accordingly.

Viral videos of maskless parties and packed bars account for hundreds out of the nearly 20 million college students in the US, they said. 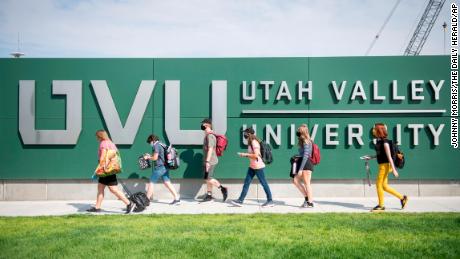 Utah Valley University students walk to campus after being dropped off by the UVX bus in Orem, Utah, on Monday, August 24, 2020.

But for at-risk students, the fear is still there -- and some must decide whether they feel safe enough to return to campus.

"The first feeling I had about universities and schools reopening was fear," Colón-Alfonso said. "Fear of lives lost, fear of the academic and social impact, and fear of how to accurately make decisions in a time where everything seems uncertain and ever changing. I also felt a distinct trepidation towards institutions who need student tuition if they want to remain afloat."

Colón-Alfonso said her school has been very "accommodating," and she feels safe returning to in-person learning. However, she added, "I know that my experience is an exception to the rule. Seeing parties on the news, receiving texts from family and friends in college with stories of the danger they see every day is unsettling."

Many at-risk students remain wary of the risks. Lynch, who is in the UK with her family, and Price, who is in Virginia with her parents, said they have barely left their homes.

But the time in quarantine has also given them a renewed sense of purpose -- and the two said they have big plans. Eventually, Lynch said, she and Price want to create a national organization for disabled students, with branches at universities and colleges.

"There's college diabetes network which we're both apart of," Lynch said, "but this would be for more disabilities -- physical, learning and invisible disabilities."

The two also hope to create a conference when it's safe to meet in person.

"My goal is getting people to even acknowledge that there are young disabled people," Lynch said. "It's really important."

For now, though, they continue to focus on building their community virtually -- and staying healthy while studying remotely.

"We have an understanding that things suck right now," Price said. "But (staying home) is what we have to do. It's going to be better for us in long run."