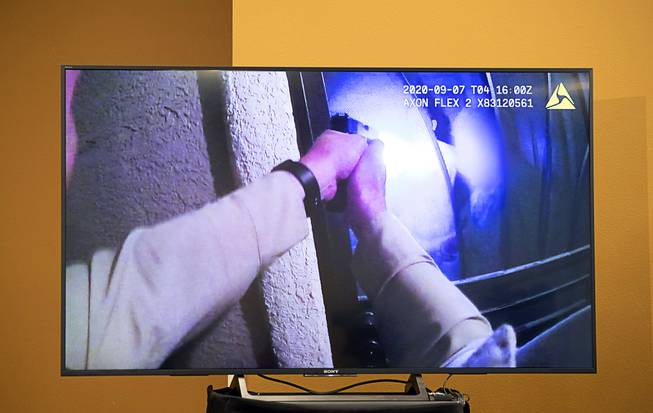 With a single gunshot through the screen of a metal security door, a Metro Police sergeant killed a man who’d been stabbing his wife in their Summerlin home Sunday night, Assistant Sheriff Christopher Darcy said Wednesday.

The shooting, which was caught on the officer’s body-worn camera, unfolded quickly after 9 p.m. in the 10300 block of Timber Willow Avenue, near Sahara Avenue and Hualapai Way.

A psychiatrist phoned police to say that his client’s wife had called him to say that Holliday was getting aggressive and that he was a “danger to his spouse,” Darcy said. The secondhand information was confirmed when the woman called 911 herself.

Officers arrived about eight minutes after the woman initially called, police said. A patrol officer noticed that the door was open, but he couldn’t make his way inside through a closed metal security door.

As the officer moved to the backyard, Sgt. Douglas King, 34, approached the front door, where he encountered the woman crying for help. Holliday was behind her, apparently attacking her with a kitchen knife.

King shouted at Holliday to drop the knife, while the suspect yelled at him to “shoot me,” Darcy said and video shows.

Simultaneously, King aimed his gun, flashed its tactical light at Holliday, and opened fire, striking him in the chest, Darcy said.

The woman, who suffered multiple stab wounds, remained at a hospital Wednesday, where she’d been stabilized, Darcy said.

In total, Holliday used eight kitchen knives, said Darcy, noting that once the woman would strip a knife from her husband, he would go grab another one.

“We don’t necessarily create the scenario; we respond to it,” said Darcy about King’s actions. “That supervisor, that sergeant in that case, had to make a decision in a split second, and that decision was to save somebody’s life that was being actively stabbed.”

Prior to Sunday, there weren’t any previous incidents of domestic violence at the home, said Darcy, noting that police had responded the day before, when Holliday was hospitalized for an unknown reason.

A child in the house was placed under family supervision following the stabbings and shooting, Darcy said.

King was placed on routine paid administrative leave while the investigation is ongoing.

This was the 14th Metro shooting of the year, the seventh fatal one, Darcy said. During the same time in 2019, Metro had opened fire 14 times, with three fewer deaths.