Dowry ... A cause of the destruction and ruin of society

Dowry ... A cause of the destruction and ruin of society The practice of taking dowry is very common in the subcontinent, especially in Paki...

Dowry ... A cause of the destruction and ruin of society 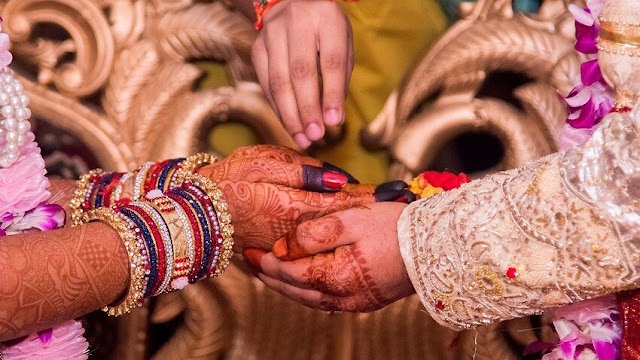 The practice of taking dowry is very common in the subcontinent, especially in Pakistan and India. Boys
demand dowry from a girl on her marriage. This ritual is considered very special in marriage
And many boys set some conditions and demands for marriage and if they can't be met, they refuse
girls. For example, house, car, big checks, etc. and considering these conditions, they do not even think
about whether they are permissible or not, halal or haraam.
Today, from high families to middle class families, all parents educate their children, especially boys.
Now, whether the boy is less educated or more educated due to lack of interest in education, in both
cases, the boy's family asks for dowry and if they do not get it, the girl becomes a victim of ridicule and
taunts from the in-laws.

Even if the parents don't have that much money, every time they sweat their blood, go through the
stages of debt and prepare many dowry items for their daughter, so that their daughter will be married to
her in-laws for the rest of her life. Don't listen to sarcasm. When a boy earns money and brings a girl as
an honor to his family after marriage, it is his responsibility and in that case he should refuse to take
dowry, but the parents are happy considering their status. You can give as much as you want and as
much as you want to give to your daughter.
Dowry is a thing of the past. After settling a boy's relationship, by showing any of their actions on
different occasions, they force the girls to do the same for them. For example, Eid is celebrated for both
boys and girls. This is one of the rituals of the subcontinent. It doesn't matter if the gift from the boy is
small or big, but if the girl gives the boy even a small gift for Eid, things start to happen.
The same thing happens with birthdays and other occasions. These are usually the families who have
more money and whose lifestyle is not only middle class but also becomes a mental anguish for the girl
and the parents. Whether it is Eid-ul-Fitr, Eid-ul-Adha or birthday, the gift may be small but it should
include love and sincerity. If you have more money then you can give as much as you want with your
love.
And even if less money is not given out of compulsion, it should not be made a big problem and the
relationship should not be disrupted or eliminated. What has been said so far is the reality of life and my
observations, feelings can also say. This practice of giving dowry is not found anywhere except in
Pakistan and India. Dowry is actually a Hindu ritual. In fact, they do not give the girl a share in the
inheritance and to compensate her, they give the girl a large dowry at the time of marriage.
But Islam has made it obligatory for a girl to have a share in inheritance.
In the name of dowry, we have made marriage difficult. This beautiful and beautiful relationship has been
made a mental anguish for the girl's parents in the name of dowry and in many ways. People say that
dowry is the Sunnah of the Prophet (peace and blessings of Allaah be upon him) because the Prophet
(peace and blessings of Allaah be upon him) gave some essentials to his daughter Fatima on the
occasion of his marriage.
But since Hazrat Ali was the cousin of the Holy Prophet (sws) and since childhood
Hazrat Ali was under the patronage of the Holy Prophet (sws) so he was equal to the son of the Holy
Prophet (sws). From his childhood, he was responsible for all his expenses. So the Prophet (peace and
blessings of Allaah be upon him) gave them some necessary equipment as a guardian to build a new
house.
I would like to add here the narration of the goods that the Prophet (peace and blessings of Allaah be
upon him) gave to his daughter Fatima: Hazrat Ali says that the Messenger of Allaah (peace and
blessings of Allaah be upon him) gave Fatima a dowry of a chador, a muskiza and a leather. He leaned

against it, which was full of grass. "
But other than that, no history book indicates that the Prophet (peace be upon him) gave dowry to
himself and his daughters.

It is said that when a daughter is born in one's home, one should start preparing dowry for her from then
on because there is a fear in the minds of the parents that if the daughter is not given a good and very
much dowry, then The daughter should not be the target of ridicule and taunts from her in-laws. Now we
come to the part where we talk about the middle ground.
Observations of various customs and traditions on the occasion of marriage have revealed that those
who do not have the space to marry their daughter in a big way but the race of the time, jealousy,
jealousy and feeling inferior People try to do as much good as possible and fall prey to the favors of their
loved ones.
Due to the lack of money in the girl's marriage, the girl's close relatives, uncles and aunts pay some
money for the wedding ceremonies, but in return, the family becomes grateful to her for the rest of her
life. Because no matter how many favors Allah bestows on us, the owner never shows us. But we sinful
human beings do good deeds and at some point, by any action.
If both the family members of the boy and the girl have more money, they can spend it as they wish,
because henna and other customs are liked by everyone, even though it is a different power.
There are rituals that come from mothers, but if you can't afford it much, then it is a very beautiful thing
and style to invite few people and perform a simple marriage ceremony.
In this, neither the boy nor the girl should complain, nor the girl and her family. Rather, we must
understand each other's compulsions. It should be noted that marriage is more blessed in which there is
less burden, so it is not appropriate to get married in a big way in the race of exhibition and competition
and to spend money, but it is more wise to walk in moderation even if you are rich.
In the case of dowry, the family can take whatever they want to give or whatever the girl wants to take
with her, but it should be done keeping in view her status. But we should not demand different things,
money or dowry from our words, attitudes and actions on different occasions or on the occasion of
marriage. There are very few people who say we don't want dowry.
By reading and writing well, by earning well, by wearing good clothes, by wearing the best watch in hand,
no boy or man becomes modern, nor by being well dressed, well dressed, with open hair, any girl or
married woman is modern. Goes It's just good in terms of fashion. A modern and civilized person is one
whose world is good, who has made his life good and easy because of his good manners, good thoughts
and ideas, and good morals and by practicing religion, who spends according to his means. Does
Encourage your future generations to do the same. And make this beautiful relationship of your life

easier, only then can we make our life a paradise. Let us all pledge that we will not adopt any dowry-
related ritual in the future.