The National Assembly unanimously passed a resolution to teach Quran

The National Assembly unanimously passed a resolution to teach Quran with translation in universities across the country. Minister of State ...

The National Assembly unanimously passed a resolution to teach Quran 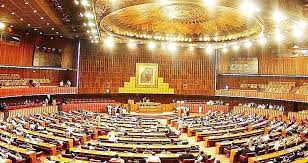 with translation in universities
across the country. Minister of State for Parliamentary Affairs Ali Muhammad Khan presented a
resolution in the National Assembly which was unanimously passed.

It may be recalled that recently it was decided to teach the Holy Quran with translation in the universities
of Punjab.

The Chancellor of all the universities of Punjab and the Governor of Punjab Chaudhry Muhammad
Sarwar had taken a historic step by issuing a notification that the Quran curriculum would be taught in
the universities apart from the subject of Islamic studies and without it one would not get a degree. The
notification said that one would not get a degree in Punjab universities without reading the Holy Quran
with translation.
Lecturers in all universities will teach students the Qur'an with translation. The Quran syllabus will be
taught in addition to Islamic studies. In this regard, a statement issued by Punjab Governor Chaudhry
Sarwar said that the Holy Quran is the real source of guidance for us. Only by following the teachings of
the Qur'an can the world and the hereafter be improved. The Qur'an is a complete code of life that was

revealed to our Prophet Muhammad to guide the world, so its teaching is essential.