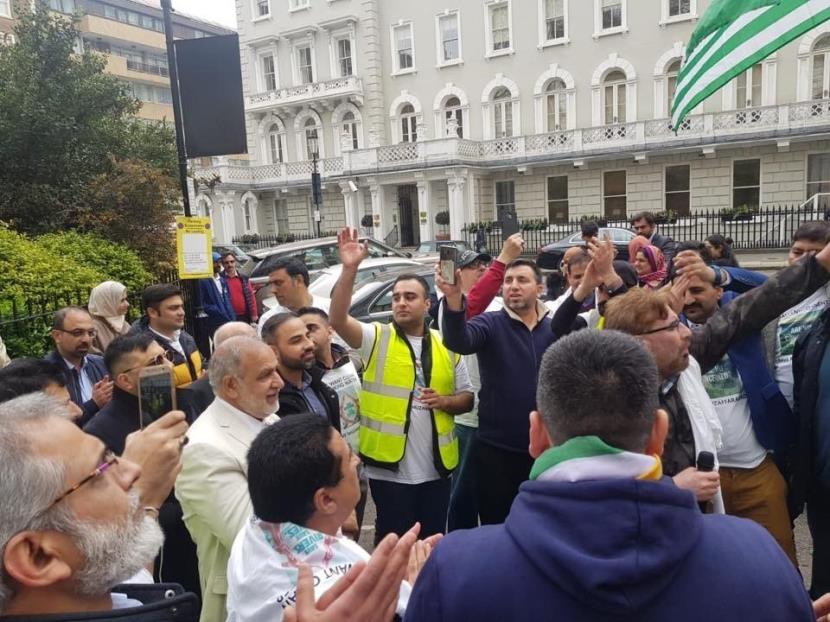 London (Saeed Niazi) Hundreds of Kashmiris and Pakistanis protested in front of the Indian High Commission in London a year after India ended the special status of occupied Kashmir. Kashmiris and Pakistanis took part in the demonstration on the day of exploitation, putting political affiliations aside. Workers of other parties including Muslim League, PPP, Jamaat-e-Islami, Tehreek-e-Insaf, Muslim Conference, Liberation Front, PTI Azad Kashmir also participated in the demonstration. Kashmiri leader Raja Sikandar on the occasion said that the Indian measures taken on August 5 last year were unconstitutional, illegal and immoral and Kashmiri people would continue their struggle till their right to self-determination was achieved. Sabir Gul of Liberation Front said that the zealous Kashmiri nation will fight till its last breath for independence from India. India is involved in serious human rights violations in occupied Kashmir and the world should take notice of it. Kashmir leader Zubair Kayani said that he wanted to send a message to India through today's demonstrations that its vile tactics could not dampen the spirit of Kashmiris and the sun of independence would soon rise in Kashmir. Former Minister Mahmood Riaz said that Kashmiris around the world are celebrating this day as a day of exploitation and we demand from the international community to fulfill the promise of Kashmiris' right to self-determination. Former mayor Slavo Ishrat Shah said that Kashmiris will not leave China till independence, India has violated human rights. Religious scholar Islam Ali Shah said that it has been a year since the lockdown in occupied Kashmir, Indian forces are carrying out massacres there, the international community needs to pay attention to the situation in Kashmir. Sadia Sadat said that India has to withdraw its forces from occupied Kashmir, how long will it continue to inflict atrocities on Kashmiris. Other speakers also addressed the demonstration. On this occasion, slogans of freedom, Modi from a terrorist and our right to freedom are also being chanted.
Send feedback
History
Saved
Community