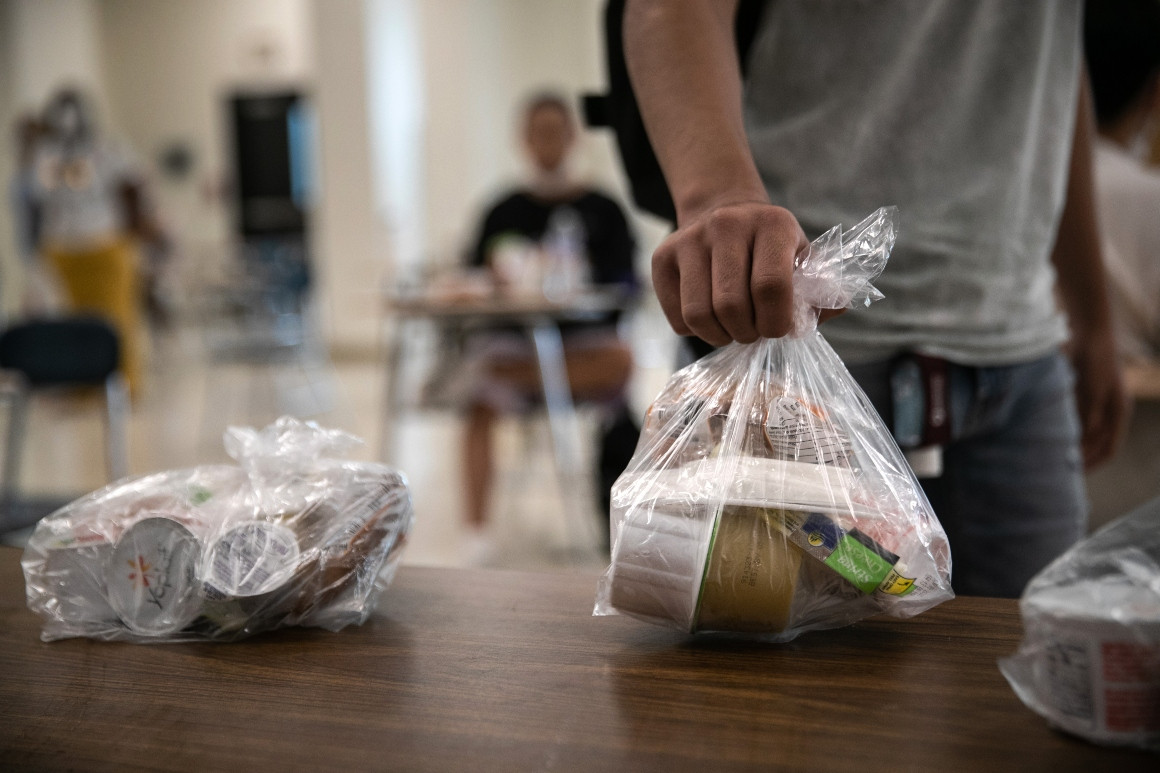 © John Moore/Getty Images A student picks up a free individually bagged lunch in the cafeteria during the first day of school at Stamford High School in Stamford, Conn.

Millions of low-income children are likely to miss out on special benefits that help their families buy groceries this month because the Trump administration has imposed eligibility requirements that prevent some states from getting the payments out before the money expires.

Congress created the program earlier this year to help make up for free and subsidized meals that children were missing while schools were either shut down or virtual due to coronavirus.

States were able to figure out who should get the payments in the spring and summer, when schools nationwide were fully closed for in-person learning. But now, as some schools re-open with a mix of virtual and in-person classes, the Agriculture Department says states must also tackle the complex job of figuring out how many days each student is not physically in school and distribute the aid to all who are spending all or part of their weeks learning virtually. That decision came the first week of September, too late for many state agencies to determine who’s eligible before the money runs out on Sept. 30.

Anti-hunger advocates worry the loss of extra payments for food will further exacerbate childhood hunger rates, which are already at the highest levels the country has seen in decades. Families who received the first tranche of payments in the spring or summer spent it almost immediately, and Census data showed that child hunger rates dropped markedly in the week after the benefits started going out in each state.

“We are very frustrated,” said Robert Gordon, director of the Michigan Department of Health and Human Services. “It’s unfortunate that our students will be the ones that suffer.”

A spokesperson for the USDA acknowledged that some states are “finding it difficult to meet the statutory requirements.”

“Unlike in the spring when schools across entire states were closed, there is currently a lot of variation,” the spokesperson said in an email to POLITICO. “This makes this complicated benefit even more difficult to administer.” The department is continuing to work with states on the issue, the spokesperson said.

© Manuel Balce Ceneta/AP Photo Children collect their free meal at East Silver Spring Elementary School, Tuesday, March 24, 2020, in Silver Spring, Md, provided by the Montgomery (Md) County Public School to school children for the duration of the state-mandated coronavirus pandemic emergency school closure. The Monday to Friday food distribution which includes breakfast, lunch and dinner has been expanded to include weekends in collaboration with Manna Food Center, many restaurants, nonprofit partners, PTAs and other organizations who have stepped up and are providing meals, groceries and gift cards to families in need. (AP Photo/Manuel Balce Ceneta)

The program, known as Pandemic-EBT or P-EBT, gives households about $5.70 per day for every school day missed. The money is distributed exactly like food stamps — on debit-like EBT cards. The aid can only be used to buy food.

Millions of households have so far received one-time payments of about $250 to $450 per child, depending on where they live.

The problem now, state officials say, is that the Agriculture Department has made it too cumbersome to apply for another round of benefits before funding runs out on Sept. 30. Congressional leaders and the White House have failed to get anywhere close to a deal on another round of stimulus aid and Congress has yet to pass a spending bill to keep the government funded past the end of the fiscal year.

As the school year began for many districts in August and early September, USDA was slow in deciding whether states could re-start P-EBT benefits. Officials at USDA’s Food and Nutrition Service finally told states in late August that they could go ahead and plan for another set of payments.

At first, USDA suggested it was acceptable for states to issue benefits only to students in districts where all instruction was virtual because of the extremely short time frame to determine who qualified.

About a week later, however, officials at USDA changed their mind and said that this simpler option was not going to be allowed. That last-minute decision sent states scrambling.

The logistics of reaching all eligible kids — including those in schools doing a mix of in-person and online instruction — are so complicated that several states say they will be unable to get aid to any of qualifying schoolchildren this month.

Two weeks ahead of the deadline to get the last tranche of the money out, only nine states have been approved: Hawaii, Illinois, Maryland, Massachusetts, Montana, North Carolina, Ohio, Tennessee and Virginia.

USDA did not answer questions from POLITICO about how many other states have submitted plans to issue more Pandemic-EBT aid.

The Michigan Department of Health and Human Services had planned to issue $93 per student to the families of more than 100,000 kids across the state that they know qualify for free and reduced lunch and whose districts are conducting virtual classes.

But officials were informed of the change in policy on Friday Sept. 4, the afternoon before the Labor Day weekend. The decision means that Michigan won’t be able to distribute aid at all in September, state officials said.

“It’s too late to comply with their new directive,” Gordon said. “They opened the door and then they closed the door — and the result is leaving tens of thousands of kids in Michigan without food.”

In Pennsylvania, officials had planned to give out $128 per student to some 330,000 low-income students. But there simply isn't time to do so under USDA’s new directive, officials told POLITICO.

“It’s just hard to understand why the federal government is doing what it’s doing,” said Teresa Miller, secretary of the Pennsylvania Department of Human Services. “This is the latest in a series of really frustrating decisions — at every turn recently they have been very keen on returning everything back to normal. But we all know the world is not back to normal.”

Pennsylvania intended to get benefits to the students in low-income schools that were doing virtual-only learning, leaving off hybrid-option schools, because officials said they didn’t have the time or the data to reach all students before the program lapsed.

The USDA’s change in policy means they are not able to issue any Pandemic-EBT benefits to students this month.

The multiple school district setups — all virtual, all in-person or hybrid of the two — has made the program much more complicated than it was when the vast majority of schools were shut down.

At hybrid schools — where students are doing some combination of virtual and in-person instruction — it’s extremely complicated to get data on each individual student’s schedule as the school year started: Should one student receive P-EBT benefits to replace three days of missed meals, or two? Another student may be learning remotely all five days. A single family with multiple children might have students in all different setups.

Many school districts also don’t know how many students qualify for free and reduced lunch until a few weeks into the school year after families fill out necessary paperwork.

Once school districts have the lists of eligible students, that information has to be transferred over to the state agencies that administer the Supplemental Nutrition Assistance Program, still known to many as food stamps.

Those agencies then determine which students at different schools are in the same households. Then, they check to see if the families are already on SNAP. If they are on the program, the benefits can be directly loaded on their EBT card. If they’re not, the state has to mail a new EBT card to the household.

Over the spring and summer, some states were issuing hundreds of thousands of new cards to households that had never before used a government EBT card.

When Congress created Pandemic-EBT in the first major coronavirus stimulus package in March, lawmakers did not foresee how long the current crisis would last. They authorized the program to go through the end of the government fiscal year, which ends Sept. 30.

But schools are still widely disrupted. Millions of kids are not going to get the meals they normally would at school, and childhood food insecurity rates are extremely high.

"We need an 'all of the above' strategy,” said Lauren Bauer, a fellow in economic studies at the Brookings Institution.

In July, Bauer and a team of researchers found that P-EBT benefits significantly reduced the number of children struggling to get access to enough food.

Using Census Bureau data, the researchers could see that the week after P-EBT benefits were issued in a particular state, the rate of children not getting enough to eat dropped by 30 percent. The effect started to wear off by the second week.

The program’s benefits, targeted at families with school-age children, were used quickly when they were doled out over the spring and summer, Bauer noted.

When a low-income family gets help from SNAP each month, those benefits often last a couple of weeks, but when researchers looked at P-EBT they noticed that families spent the money almost immediately.

“That suggests to me that this was a pretty important infusion of cash,” said Bauer.

With the program now set to expire in less than two weeks, anti-hunger advocates are trying to ramp up pressure on Congress to extend the program through the end of the school year. With stimulus talks seemingly dead for now, advocates are asking lawmakers to include an extension of P-EBT in any short term spending package.

“Congress needs to act,” said Crystal FitzSimons, director of school and out of school programs at the Food Research & Action Center. “We need to make sure the benefits are available for September, but it’s going to be a really long school year for families if their children are learning remotely."

Gallery: SF State to lay off 131 staffers, but no faculty, after budget shortfall (San Francisco Chronicle)